The biotechnology company, founded in 2001 in the Technology Park, plans to move into its new building in mid-2023 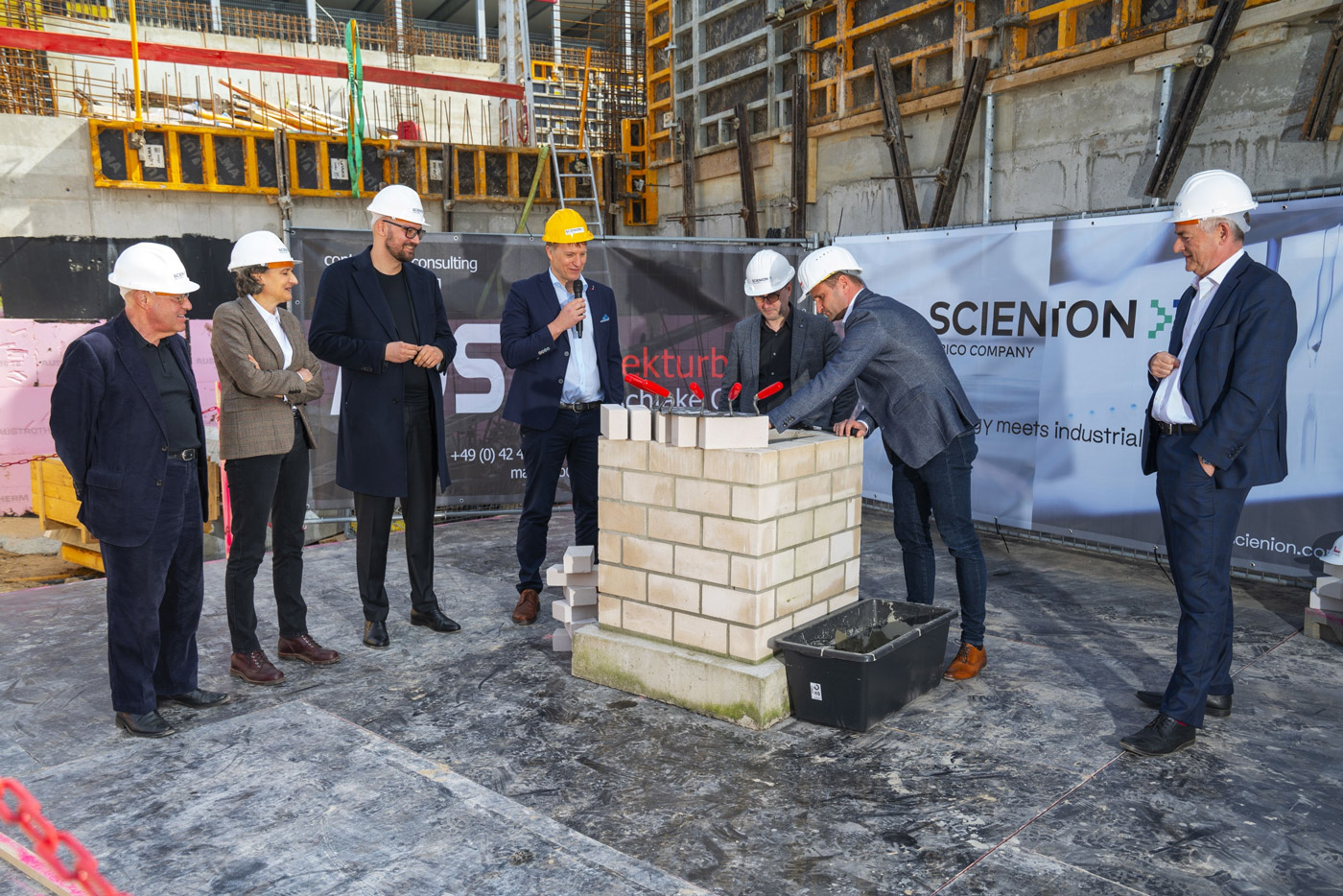 Together with numerous guests from politics, economics and science, SCIENION GmbH celebrated the laying of the foundation stone of its new headquarters in Berlin Adlershof. The building complex will be constructed on a space of over 3000m², enabling the company to bundle global activities from a site with sufficient space to pave the way for further growth.

One of the first congratulators at the ceremony was Dr. Gregor Gysi, a prominent member of the German Parliament. The new construction at Wagner-Régeny-Straße 15 is located in his electoral district of Berlin Treptow-Köpenick. In his welcoming address he noted: “SCIENION GmbH is an example of the success of the science location Wista in Adlershof. The company was founded here, has been growing steadily ever since and is now building its new company headquarters here.”

Guest speaker, State Secretary Michael Biel from Berlin’s Senate Department for Economics, Energy and Public Enterprises, was delighted about SCIENION’s successful development that led to this investment into the construction of its new headquarters. He said: “SCIENION is a prime example of a successful and innovative company founding in Berlin. The company, which has received the Berlin-Brandenburg Innovation Prize twice, impressively shows how science and business can inspire each other in Adlershof. It is a great pleasure to see that SCIENION has remained faithful to Adlershof as a place of the future and that we as the State of Berlin have also been able to make a contribution to the expansion of the site with the offers and advice from our business development department. I wish SCIENION continued success and look forward to innovative developments and products 'Made in Berlin'.”

In further addresses, Dr. Kai Uwe Bindseil, Cluster Manager Healthcare Industries Berlin-Brandenburg and Dr. Viola Bronsema, Managing Director of Bio Deutschland e.V., addressed the regional and national significance of SCIENION’s development as well as the involvement into science and industry networks. Dr. Kai Uwe Bindseil emphasized: “The entrepreneur Holger Eickhoff stands like no other for the rise of the health capital Berlin. In 25 years, starting as a postdoc and then as a founder, he has built up a globally active world market leader with a strong team. I am pleased that SCIENION’s next growth step will also take place in Berlin.” Dr. Viola Bronsema said: "SCIENION shows how bio-based inventions can be developed with experienced engineering services for application. The company has been a member of BIO Deutschland for almost a decade and has been a valued partner in biotechnological research and industry for twice as long."

SCIENION has been located at the Science & Technology Park in Berlin Adlershof since its foundation in 2001 and has chosen to remain in the precinct due to its excellent environment. Therefore, today’s laying of the foundation stone was for SCIENION’s founder and CEO, Dr. Holger Eickhoff, a very special event: “We are delighted and proud to expand our premises due to our corporate growth. For SCIENION, it was the best and future-oriented decision to initiate the construction of our new headquarters in Berlin Adlershof. I would like to thank all people involved in this process, last but not least our parent group BICO. We, and by that I mean our entire great SCIENION team, are really looking forward to moving into our new premises next year.”

In February 2020, SCIENION acquired the leasehold for the 3,037 m² state-owned property from urban development agent, WISTA.Plan GmbH, with the building permit granted in early November 2020. Plans encompass the construction of a four-storied building complex with laboratories, clean rooms, production facilities, storerooms, areas for services, administration, sales and marketing, as well as an underground car park. Construction is expected to be completed by the end of May 2023. SCIENION GmbH is the builder of the new complex which is designed by AJS architekturbüro jürgen schlake GmbH, an architectural office that remains responsible for further project management. Following an invitation to tender, Adolf Lupp GmbH + Co. KG was commissioned as the general contractor for the turnkey completion of the building. The company has already completed a number of large building projects in Berlin Adlershof. Ruß Ingenieure AG, also based locally, acts as subcontractor and is responsible for planning technical building equipment.